When it comes to writing, a few gifted people are able to vomit the Sistine Chapel right onto the page. But if you’re anything like me, writing can be a long, tough process. And the thought of sharing it with someone? Don’t mind me…I’ll just be hiding under the bed.

That’s why I’m an editor! See, I love words. I always have. And there’s nothing more satisfying for me than helping an author elevate their long-worked-on post into a masterpiece.

We run our Hit Subscribe blog on WordPress, so we use this helpful analytics tool called Yoast. Yoast runs two separate assessments on each post: one for your search engine optimization (SEO), and one for your readability. (More on exactly what that entails later.)

During my time here, I’ve occasionally run into a slight…difference of opinion with Yoast. I’ve shed blood and tears with an author to edit a post, and when the changes are finally perfect, Yoast returns a bad readability score. Talk about a buzz kill!

Now, those analytics don’t necessarily mean your post is difficult for a human to read. Your readability score is just the product of word taxes set by Yoast. If your post has just two percent more sentences with more than 20 words than the recommended 25 percent (to use a frequent example from my experience), suddenly you have a bad readability score.

I’m pretty confident in my abilities as an editor, so it’s really frustrating to see a bad (or even “OK”) readability score. But Yoast’s analytics don’t lie! Improving your readability score will increase the amount of time a visitor spends on your page and decrease your bounce rate. So going through the pain of self-editing to finally get that green readability score is worth it. It’s not easy—trust me, I know. That’s why I’m going to share some strategies that you can use to address Yoast’s common readability complaints.

This is fairly straightforward, so I won’t spend too much time here talking about things that you probably already know.

Yoast currently analyzes six components of your writing. To get green bullets across the board,

There is a window of error on all of these numbers and percentages—when you exceed them, Yoast will return an orange or a red button. (Yoast will also notify you if more than two subsequent sentences start with the same word. This feature isn’t included in their official list of readability checks, but if you have this problem, it will be factored into your readability score.)

And if you’re interested in knowing more, take a look at these articles on Yoast’s readability checks and how they set their parameters.

Archimedes said, “The shortest distance between two points is a straight line.” Now that may not be true according to modern mathematicians, but let’s give the guy a little credit. After all, he did live almost 2000 years ago. 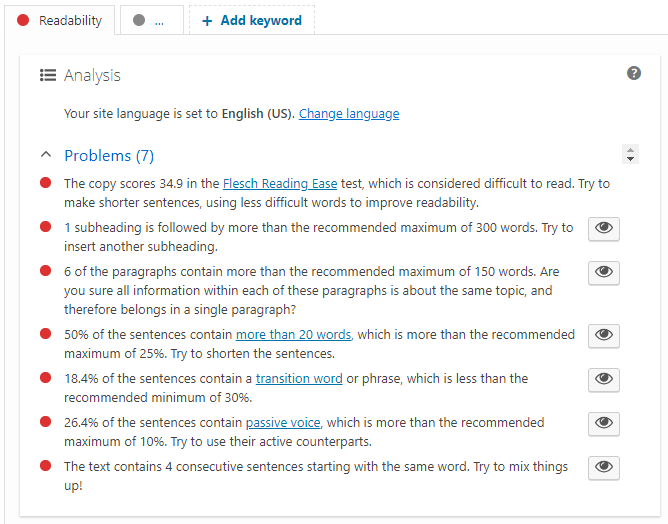 It’s no use to blindly start hacking your post apart. You’ll spend way too much time making changes that aren’t going to make a difference.

Let’s take a closer look at that screenshot. Oftentimes, solving just one or two issues will be enough to bump your post up to a green readability score.

So when you look at your score, you want to identify the issues that you can address efficiently to up your readability. This is where simple isn’t always easy. Address the issues one bullet at a time, starting by fixing the issues with the smallest margins of error until you get an overall green readability score.

In this example, you might start by addressing transition words or passive voice since those are the closest to Yoast’s preferred percentages. But since this post is clearly a hot mess and will need lots of edits, I’d start with a two-for. To address the issue of the Flesch Reading Ease and the number of sentences with too many words, let’s break up some sentences. (And while we’re at it, we might as well tackle the paragraphs too.)

I get it—you have a lot to say! And sometimes a 1200-word blog post just doesn’t seem like enough space to say it.

If Yoast is complaining about the number of words you have, it’s time for some aggressive line editing. In our case, what that essentially means is closely reading every word in every sentence to see if there’s a more efficient way to say it. (And yes, there will be times that you’ll lose a bit of your authorial voice to manage it. C’est la vie.)

Luckily, Yoast has a handy-dandy button that will highlight the problems it sees in the text:

This is the point when I copy the problem section into a word processor to get an accurate, self-updating word count. Once you know how many words you have, you can determine your next steps.

If you’re a lot of words over the limit, look for a logical place to break up a long sentence or paragraph or to add a new subsection. And if you can’t do that, just look for places where you could use one word instead of two or two words instead of three! Little by little, you’ll get down to an acceptable number of words.

But Everyone Says Self-Editing Is Impossible!

Let me give an analogy here. If your blog post is a horror film, you, as the writer, are the final girl—the hero. And your editor? Please don’t think too poorly of us after this (because editors really aren’t evil people), but we’re the chainsaw-happy psychopaths that run around killing your darlings.

The catch? If you don’t have an editor, you have to be the final girl with a split personality disorder who’s also the killer.

So, Final Girl, don’t hide in the dark basement with your friends. It’s time to sneak away from the group and grab that bloody chainsaw.

The first, simplest (and easiest!) thing you can do to cut words is find places where you can add contractions. “It’s” instead of “it is,” “don’t” instead of “do not,” and so forth. The same goes for possessives! For example, you might say “the table’s contents” instead of “the contents of the table.” That’s three words instead of five!

A thesaurus is also a helpful tool to have. Can what you’re describing be said with one word? Do you really need that third adjective? And here’s a helpful hint for verbs! By default, some verbs work in conjunction with a preposition. “Listens to,” “waits for,” “focuses on.” If you tell your reader to “look for this file,” instead say, “find this file.”

Changing passive sentences to active will also help you reduce your word count—you’ll see why in the next section.

And if you’re really desperate to get rid of some words, look at your transitions (section three of this post). Do not remove transitions completely. If you do that, you’ll just create another readability problem for yourself. But maybe you have a lengthy transition phrase that you can shorten. You might have said, “in this example.” Keeping that penny-pinching, “every little bit helps” mindset, say “for example.” You’re one word closer to your goal.

Still think self-editing is impossible? You can make it easier by reading aloud to yourself or pasting your writing into a text-to-speech editor. I like this one.

I’m no techie, so let’s talk mechanics! Of course, I mean grammar mechanics.

Here are the basic components of an active sentence:

The dog chases the cat.

You have a noun (the primary subject: the dog), a verb (the action: chasing), and another noun (the recipient of the action: the cat).

The passive version of this sentence, in contrast, would look like this:

The cat is chased by the dog.

One of your biggest tip-offs that a sentence is passive is if the recipient of the action (the cat) appears first. And in some passive sentences, the primary subject (the dog) doesn’t even appear! Simply:

The cat is chased.

I see this problem quite a bit in technical writing. A lot of the time, you’re describing ambiguous things that a program does to achieve this or that result. It gets complicated to explain what functions in the code are at work, and if you’re working in a program that you didn’t write, you might not even have visibility into how to assign action in the sentence.

So How Do We Fix It?

In a tutorial, you might say, “Click this button, and [action] will be performed.” The problem here is that there’s no noun performing an action. Rather, an action is just occurring spontaneously.

Tech writers aren’t the only ones who have issues with the passive tense. It occurs naturally in language when we’re not able to fully describe something. Just accept that fixing passive sentences might push you outside of your comfort zone, and get in the habit of thinking a little harder about the things that you’d normally be able to do effortlessly. Your writing will actively benefit.

When you think of transition words, middle school comp class might be the first thing that comes to mind. “Structure your argument and transition into each new paragraph with words like ‘first,’ ‘next,’ and ‘finally.’ Oh, and never start a sentence with ‘and’ or ‘because.'”

Your writing and grammar teachers meant well, truly! But these are rules that you shouldn’t take with you into your adult writing life. Can you imagine a blog post (where a paragraph is two or three sentences) that starts each new paragraph with a sequential transition? By the time you got to the end, your last paragraph would start with “fiftieth” Well, second to last. Because of course your last paragraph always starts with “finally” or “in conclusion.”

So when we’re talking about blog posts, our transition words transcend (or break) the rules we learned in grade school.

You’ve probably head it before: write like you’re speaking to a friend.

The thing is, we don’t speak the way we write. We’ve been taught to write very methodically. (At least when writing with a purpose—freewriting is a different story.) It all goes back to grammar school—learning the components of a clause, a sentence, a paragraph, an essay. Everything builds into one cohesive movement, like a symphony.

…Whereas when we speak, it’s basically just one giant run-on sentence that eventually gets to the point but it takes a while because we tend to get sidetracked because writing is a more focused form of communication. Phew! Anyone else out of breath?

Yoast recognizes the gap between writing and speaking, which is why as an author it’s your job to marry the methodical purpose of writing with the naturally-relatable tone of speaking.

And the key to achieving that is…you guessed it! Transition words. Take a look here: 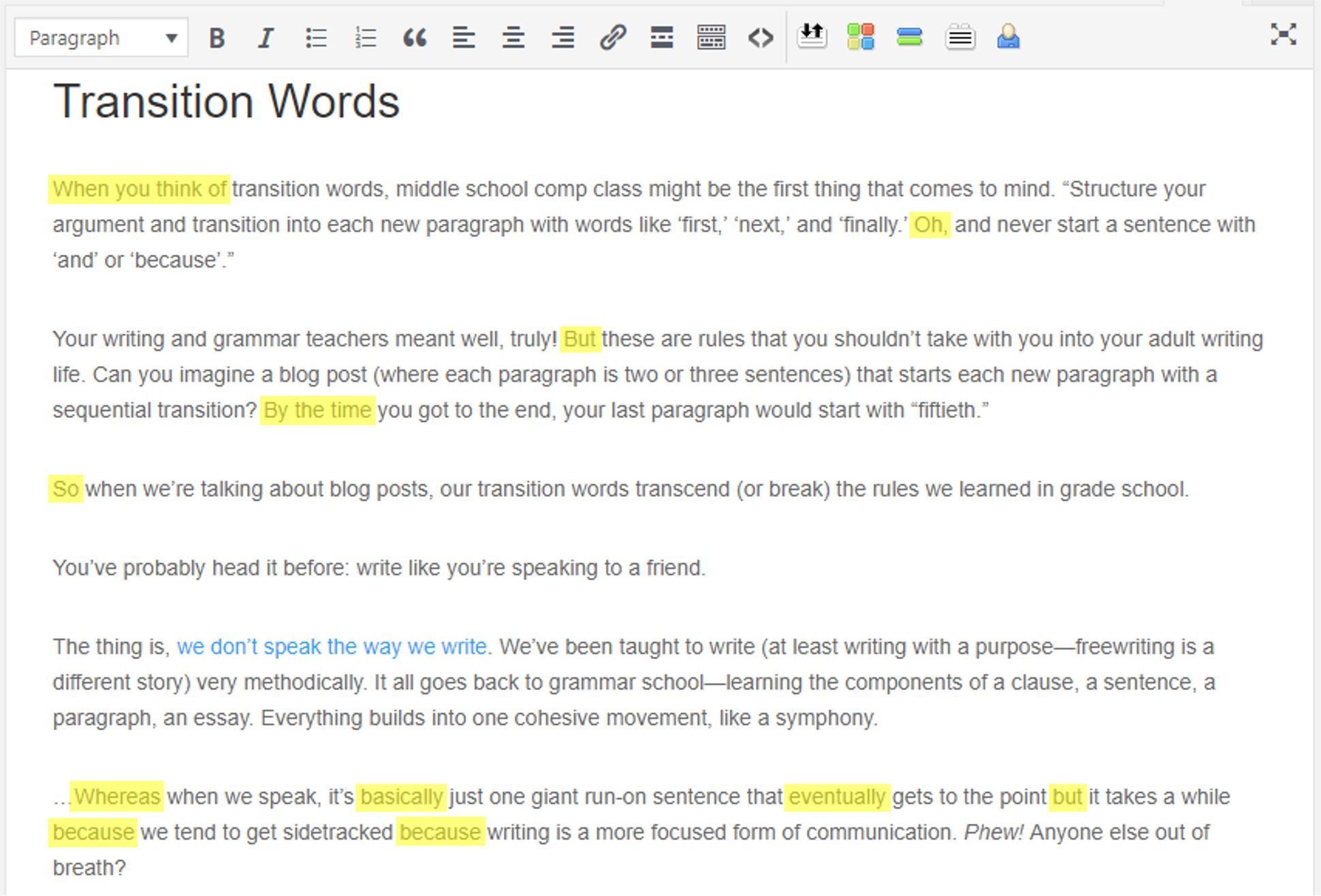 Literally what you just read plus highlighter.

For a more in-depth look at transition words (with examples), check out this post!

“In Conclusion” (Remember Our Transitions?)

Yoast is a great service—for a lot of reasons. To name a few of the benefits, it’s freemium (and the free version suits us just fine!), it offers an SEO analysis, and when it comes to readability, it tells you exactly what’s wrong so you can fix it.

If you’re worried about your readability beyond Yoast’s standards, check out this post for some more helpful tools.

Remember, writing is a process, and there’s always room for improvement. If you stumble across some creative differences with Yoast, you’re not the first. And editing your post to be compliant with Yoast’s readability checks isn’t the end of the world. The important thing is that you’re writing. So keep writing.

This post is by Kristin Rawlings. Kristin is a developmental (and occasional copy) editor. After realizing in college that she probably needs a more practical career than “aspiring best-selling author,” she found her passion for editing. Now, she spends her days helping bridge the gap between writers and their readers (and extolling the Oxford comma).