Picking a Keyword After Writing Your Post: Will it Work?

Maybe you’ve written an article, and now you’re thinking, “how do I get eyeballs on this?” You can post it on Twitter or social media, but what you’d really like to know is if the piece ranked for keywords so people could find it via Google. You’re probably thinking, “now that I’ve written this, all I have to do is work the search engine magic to help people get to this post.”
It’s a nice concept, and you can try this at very unusual times and get this to work. But that’s probably not how you should go about it.
How can you take an existing piece of content that you’ve already written without search in mind and retroactively fit a keyword for it? Is this something you’ve thought about before when you were sitting at the drawing board painstakingly trying to find a good keyword?
Well, spoiler alert, fitting a keyword to your post after you’ve created it might be near-impossible. It’s fairly hard to do for a post and even harder for you to pull off successfully. But why is this? Why must the keyword come before the post? One of our founders, Erik Dietrich, has sat down to explain this concept and answer your questions in a recent Youtube video.


Below, you can read more about what he had to say on the matter.

The reason why this typically doesn’t work has to do with something called search intent. You may not realize this, but just about every time someone types something into a search engine, they’re actually asking a question.
For example, you can go to your search engine and type in “Chinese food.” You’re probably typing that in because you’re trying to find out “what are Chinese food places near me?” If you type in something like the Chicago Bears, you could be asking a number of questions. You could be wondering what is the Chicago Bears schedule? Or who plays on the Chicago Bears? The list goes on.
No matter what you’re typing into your search engine, you’re asking some form of a question. Sometimes, you might just do it in a very shorthand format. Sometimes you could create a search engine query like “what is the name of the Chicago Bears stadium?” but other people could just type “Chicago Bears stadium” to ask the same thing. So search intent is the idea of taking the shorthand keywords and matching it with the questions people are actually asking.
In 2019, SEO or search engine optimization isn’t really a system you can game anymore. Instead, it’s all about figuring out what question people are asking and then just answering it with the hope of actually being helpful.

Why the Keyword Has to Come Before the Post

So, to circle back to a blog post that you already wrote, the odds that you wrote a blog post with a search intent in mind are pretty low. When you write a blog post, you’re typically coming up with something off the cuff. You may be emulating a columnist or a magazine writer and you may be writing about thought leadership type pieces or why this trend does this or that.
In short, you’re going to be writing original content, striving for originality, or, by definition, something that people haven’t thought of before. You’ll be saying things like, “here’s this idea presented in a new light,” or “my hot take is this on what’s happening in the world lately.”
That stuff something that no one is looking for. Why? Because it’s original. And how can people be searching Google for things they’ve never thought of before? This is where the challenge is.

Now, these posts about new and original thoughts aren’t bad. These could be great posts, but they’re just not great posts to organically rank for on search engines.
Here’s an example: At one point, Erik wrote up an article on tech debt. It’s a blog post he wrote years ago that wound up being wildly popular. It ended up on Reddit, got shared by programmers, the whole nine yards.

However, it’s not optimized for organic search. It doesn’t really have a great organic profile and here’s why. Technical debt is the idea that you’re carrying debt from a piece of software that’s poorly put together, which has hidden costs.
The term “technical debt” is something that many people in the software world search for. But what people aren’t searching for is “what is the human cost of technical debt?” Why is no one searching this? Because no one has thought of this before.
It’s an idea Erik came up with, and therein lies the reason why it could be popular, but not from organic searches. Erik could try optimizing for “tech debt” but the search intent or question people are asking when they search that is “what is tech debt?” So this would be unsuccessful because this article doesn’t answer that question, it answers a different question people aren’t even thinking of asking yet.

The Problem You Might Face in Trying This Out

Another example could be with the Chicago Bears again. (Are you noticing we’re Chicago fans yet?) 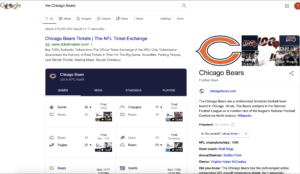 Someone could write a news article or post stating that the Chicago Bears have an underrated chance to win the Super Bowl in 2020. What would the search intent be for finding this article? The Chicago Bears? That’s too broad. If that’s a keyword you want to match to your hypothetical post, then you’re competing in a really intense space to rank at all for that keyword.
So you go back to the drawing board. What about “Chicago Bears Super Bowl?” you think. Well, if you go that route, again, there’s a lot of space that’s already taken up that you’d be competing for, and that’s a different question people are asking when they’re searching that as well. Google is insinuating with that keyword that people are trying to actually ask “when did the Chicago Bears last win the Super Bowl?” (If you’re curious, that was back in 1986, but hey at least that’s better than going through a 108-year drought like the Cubs did.)

Okay, I Understand. But Now What?

So, hopefully that provides an example and framework for understanding why the answer to “how do I retrofit a blog post for organic search?” is pretty much don’t bother.
Instead, you’re much better off figuring out what questions people are asking the search engine and then answering those. Every now and then you might write a post that sort of lines up with some keyword and the search intent behind that keyword. So, you could very well luck out. But the odds that this will happen to you every time are very, very low.
So when you just sit down and think, “alright, I feel like writing some stuff,” you probably won’t be magically answering someone’s questions. And you also probably won’t magically be answering a question that isn’t already a competitive one on search engines.
Essentially, we don’t think in search engine optimization terms. But don’t feel bad for wondering about this question. Plenty of people contemplate this question all the time. They hope that they can take an old piece of content and revamp it for the sake of doing well in search. And almost always, the better answer instead of trying to get it to rank organically is to syndicate it on social media or other places to bring traffic and eyeballs to it.