Should You Outsource Blogging for Your Site? 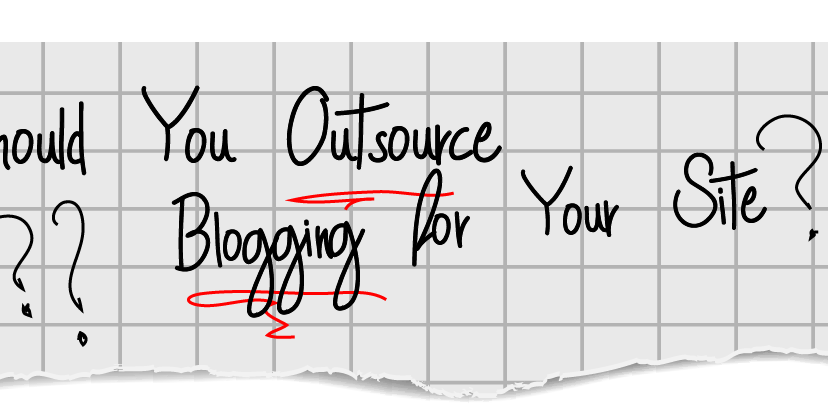 Alright, let’s acknowledge the elephant in the room.  Hit Subscribe’s mission involves helping companies with their blogs, prominently including writing posts for them.  So if you ask us whether you should outsource blogging, you can probably predict our opinion on the matter.
But here’s the flip side to that.  We didn’t just randomly decide out of the blue to start blogging for other companies.  This business came about as a result of one company after another approaching me, asking for help with their blog.  They had compelling reasons, and I agreed.  As the months and years went by, their traffic, conversions, and revenue increased.  Eventually, we formalized the business model into Hit Subscribe proper, incorporated, and the rest is (admittedly localized) history.
So we don’t tell you this works because we picked it as a business model.  We picked it as a business model because it works.

Your Hesitation to Outsource Blogging

I get it.  Your blog is part of your website, and your website is an expression of your company.  You probably want things up there about mission and values, history of the founding, and the like.  The natural position is to want all of that content—that expression of your company—to come from, well, you and from employees at the company.
I can relate.  In fact, I can relate in more ways than one.  I say that because this reminds me of working for app dev agencies and running an IT department years ago.  How so?  Well, we thought at the time, “Hey, we’re software developers.  What kind of software developers would we be if we used something like WordPress instead of building our own websites?  After all, building websites is what software developers do.”
It was an understandable and common sentiment at the time.  And yet, these days, that outlook falls somewhere between dated and silly.  Don’t believe me?  Check out this parody website and realize that every company’s website is now more or less the same thing.  No SaaS companies or app dev agencies code up websites in 2018.  Heck, do you know who built Hit Subscribe’s website?  Do you think it was me, the one with more than 15 years of software development experience?  No, it was Amanda, who handles design, among other things.
So it went with app dev and website creation. And so it’s going with content.  Again, I get your hesitation.  But it’s misplaced.  Let’s take a look at why.

Your Blog Is a Marketing Funnel Asset

If you’re reading this and you’re Apple or GitHub or something, then my apologies.  This section (and post) isn’t specifically directed at you.  Why?  Well, because your blog serves a different purpose than the blogs of Hit Subscribe’s target audience.  Large, well-established companies with lots of mindshare will tend to have complex, layered marketing strategies, many of which do not specifically involve looking for more eyeballs and audience.
In the pre-international conglomerate stages of your company, however, your strategy is likely to be simpler.  Attract more people to your site, get them into your funnel, and convert them to customers.  By and large, you probably want to use your blog to generate revenue via inbound marketing.  And to do this, it really doesn’t matter who writes the content.
Now, you might be thinking that your blog is an important way to establish your company (or, specifically, early employees) as authorities and experts in your domain.  And, depending on more specifics than I’ll go into here, that may be true.  But guess what.  You can still do that while outsourcing your blog’s content.  You don’t need to outsource all of the content to outsource some of it.
So understand that your blog should be less of a modern corporate version of 2001 MySpace pages, expressing who your company is and what it values.  Instead, you should view it primarily as a way to attract potential customers.

With a new view of your blog’s purpose in mind, let’s take a look at a related point.  On this blog, we really hammer home the point that your blog is about your readers and not about you.  And your readers don’t know or care who’s writing your blog posts.
Picture yourself perusing social media, RSS feeds, or a random site.  You find yourself reading some interesting content.  Do you

Most people that wind up at your site will wind up there through social shares of a post or through googling and finding it organically.  Those people initially may never have heard of your company, and they’ll certainly not know or care whether the person writing the post works there or not.
What about your more regular readers?  Won’t they keep track of such things, especially if they were fans?  Well, would you in their position?  Would you see a new byline on the blog and stop reading, cancel your subscription, or refuse to do further business with the company?  Probably not.  You’d probably shrug and think, “whatever” or maybe just assume the company had hired a new employee or something.
The point is, the bylines on your blog really, really do not matter to the overwhelming majority of your readers.

Avoiding the Curse of Knowledge

The marketing funnel is something of a vague concept.  I’ve seen definitions that call it out as a purely a pre-purchase construct, but I’ve also seen some that include a spot for maintaining existing customers at the bottom.  Before you accuse me of a non sequitur, let me make my point.  You might want to write bottom-of-the-funnel blog posts that get into elaborate detail about your product for the sake of your existing customers.
But my goodness, you do not want to write only those types of posts.
Imagine going to a blog you’ve never seen before and finding what appears to be an instruction manual for their product.  Would you stick around?  Sign up for the mailing list?  Or would you shrug and close the tab?
Your engineers know your product.  They probably love it.  And they probably pour their blood, sweat, and tears into it, knowing it inside and out, frontwards and back.  This creates a cognitive situation known as the curse of knowledge.  It becomes very difficult for them to explain the product to people who don’t also know it intimately.
When you outsource your blog, you bring in fresh people that have an outsider’s perspective on your offering and its value proposition.  They’ll have an easier time explaining things to people who aren’t familiar with it.  This allows them to, among other things, help you sell benefits instead of creating boring feature lists.

Show the Community You Have Outsider Buy-In and Community Involvement

You know what’s not at all surprising?  People who work at company X telling others they know that company X has an awesome product.  People expect that.
So think of this somewhat surprising angle of outsourcing your blog.  You’re bringing in outsiders whose incentive to speak positively, while still present, is somewhat muted.  In other words, your employees have an awful lot more skin in the game than a freelance software developer writing the occasional blog post for beer money.
This one I’ve discovered in a fashion somewhat specific to Hit Subscribe.  Our agency has a unique value proposition in that all of our authors are software developers.  And when we think about companies for whom we want to write, the product matters.  We don’t want to stump for products we don’t like.  I have actually passed on gigs before because I wasn’t a fan of the software.
So you can think of external software developers writing for you as developer evangelists of a sort.  We promote our posts and your product to our own audiences, friends, and coworkers.  We make it very visible that you have friends and advocates beyond just those to whom you give a full-time paycheck.

You and Your Engineers Have Better Things To Do

I’ll close with a final piece of rationale that ties back to what I said earlier.  Remember how I talked about being part of app dev agencies and departments who thought that because we were software developers, we should also develop our own websites?  And remember how I said we stopped thinking about that?
Well, the reasoning for that was simple.  Development of our own website put us in the business of, you know, developing our own website. That took us out of the business of our actual business.  This understandable but quixotic impulse turned us as engineers from profit centers to cost centers.  Spending a bunch of time writing blog posts does the same to you.  (And yes, I realize the irony of writing a blog post for my own company about this—but remember that HS is a marketing agency and not a SaaS company.)
Your engineers are busy.  You’re busy.  If any of you want to write for your site’s blog, that’s great.  But squeeze it in occasionally or do it in your spare time.  Because every hour you spend in WordPress is an hour you’re not spending building enhancements, supporting your customers, growing the business, and shipping.