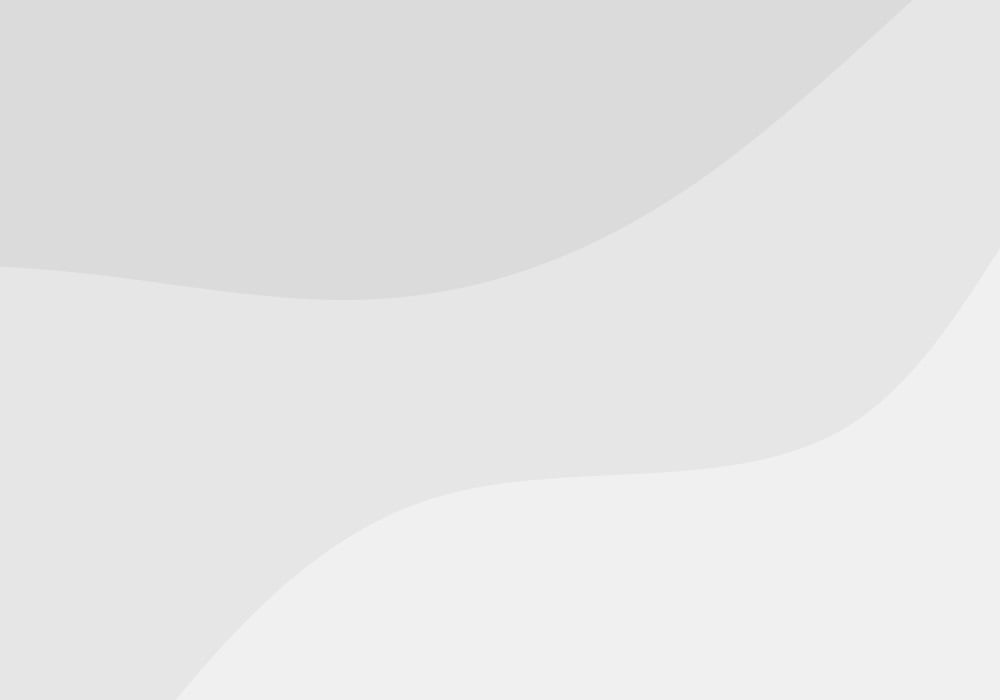 This is a question I’ve now received from a variety of parties, in a variety of circumstances.  Hit Subscribe clients with serious revenue, freelancers, and employed individual contributors have asked this.  Simply put, they want to know if they should guest post.
First off, what is a guest post?  That’s pretty easy.  A guest post is original content that you write for someone else’s blog but with byline credit for yourself.  Instead of writing content for your own blog, you write for someone else’s — and often that someone else has a lot of traffic.
So, should you guest post?  I can answer that really quickly: probably not.
Now, when I say “probably not,” I don’t say that equally to everyone reading.  If you asked me whether or not you should drink battery acid, I would say “probably not” and mean it in a much different way.  In that case, I would mean it equally for everyone reading. (And maybe I should simply say “no,” but I’m a stickler for precision.  I can’t know that someone out there doesn’t have some weird, acute condition that battery acid might actually fix.  Anyone who’s watched the TV show House knows anything is possible.)
About guest posting, I mean this: if you’re wondering whether or not you should guest post, you probably shouldn’t.  That’s because if you’re wondering about it, you probably don’t have a strategy for making it pay off.  If this is the case, you’ll be wasting your time.

Before I dive into strategy, let’s first understand guest posting.  Why do people do this?
There are three main ostensible value propositions that you’ll hear:

You can achieve all of these goals via the guest post (though the first one is increasingly dubious, as I’ll speak to shortly).  But I’d like to point something out here.  None of these is a first-class goal — they’re all interim goals.
I wrote about a similar dynamic recently for conference speaking, but the same idea applies here.  When you cite these goals, you’re falling into the old meme trap:

So let’s take a look at these goals individually, examine their validity, and then look at how we can tune them into a strategy toward an actual first-class goal.

I’ll probably cover this more extensively in a future post, but suffice it to say that backlinks to your site matter.  Google figures out how seriously to take your site in its rankings in a variety of ways.  But the links to it are one of the most powerful possible signals.
The reasoning is both straightforward and elegant.  If other sites (especially those with a lot of authority, such as Stack Overflow, news sites, etc.) link to you, they’re staking just a little bit of their reputation on you and your content.  The more sites that think you’re worth referencing, the more Google assumes you’re worth referencing (and thus worth ranking higher in searches).
So you want a lot of links back to your site.
And what better way to do that than to write posts for some other site?!  They’re practically required to link to your site in your byline, right?
Historically, this line of thinking held up, and you could build authority this way.  But in 2014, Matt Cutts of Google’s anti-spam team wrote a blog post called “The Decay and Fall of Guest Blogging for SEO.” “So stick a fork in it: guest blogging is done,” he advises.  Moz (widely viewed as the authority on SEO) and other similar sites offer similar advice.
Make no mistake — there’s nothing wrong with a byline that links back to your site.  But Google understands this is an obligatory link, so it doesn’t use it to help your authority. 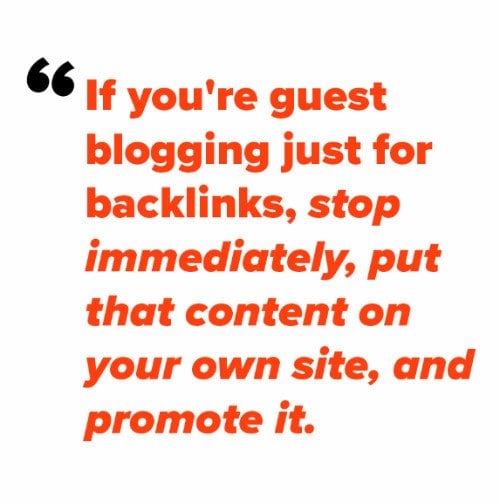 If you’re guest blogging just for backlinks, I’d suggest that you stop immediately, put that content on your own site, and then promote it.  A good strategy for getting “legitimate backlinks” is to write content people like. Then, people will link to it.  It’s getting harder to game Google.
This brings us to the idea of “influence and authority.”  Both are great tactical achievements, but toward what end goal?
To understand what I mean, let’s take a hypothetical senior software engineer working for a company.  Let’s say that she hears the advice that she should “get out in the community” and “build her brand.”  So she starts doing things like speaking at the aforementioned conferences and writing guest posts.
Let’s say she hits a home run and gets an article published in TechCrunch or on CIO.com.  It’ll probably impress her peers some, but what then?  Does she march into her boss’s office and ask for a $3,000-a-year raise because she’s kinda sorta famous now?  Does she apply for new jobs, asking for 20% more money?
Of course not, because aside from the mild social cachet, nobody paying her cares.
Influence and authority are powerful, but only when you have a specific plan to measure and capitalize on them.

Guest Post for Getting in Front of More People?

You face a similar conundrum when it comes to getting in front of more people.  Forget guest posting for the moment, and let’s talk virality.
I’ve now lost track of how many times I’ve hit the front page of Hacker News with a blog post. (I write a lot of them, so the odds are with me.)  This can bring you as many as 60,000 visitors in a day.  For one bright, shining moment, you’re in front of a ton of people.
The first couple of times it happened to me, I experienced a flush of fascination with my own apparent fame.  Hundreds of people left comments and tweeted at me and such.  I figured it was just a matter of time until the reporters started calling.  In fact, I was probably well on my way to a life of semi-fame.  Or something.
Eventually, I realized that’s not how it goes, even for really viral populist rants.  And it’s certainly not going to go that way for a guest post.  Sure, you’re in front of a much wider audience, but only a fraction of the people from that post will click through your byline to your site.  And only a tiny fraction of those will bookmark your site or subscribe to your feed.
Is a tiny fraction better than none and worth pursuing?  Absolutely.  This is a numbers game, and you’re in it for the long haul.  But are you going to write one (or many) guest posts that magically catapult you to some much larger soapbox?  Nah.

So What’s the Strategy?

With expectations now tempered about all three rationales for guest posting, let’s get to the fun part: building a strategy where guest posts do benefit you.  Here’s what you need in order to make that happen:

This may sound complicated, but it’s really not.  Let’s take Hit Subscribe and this post as an example.  Here’s a simple hypothetical that I’m coming up with off the cuff.

And that’s just off the top of my head.  I trace a path directly from reaching a wider audience to dollars while offering value to the audience along the way.  This is how you want to approach guest posting.

Do Your Homework First

I’ll end by stressing the importance of preparation as you create your plan for guest posting.  Specifically, you need to set up everything else first and only submit guest posts when you’ve got everything just so.
Here is the traffic for a middling DaedTech post over the course of about a month.  It starts off with a few hundred views per day, trickles down to a hundred for a week or so, and then keeps petering out.  DaedTech is a site that does a pretty good bit of traffic. It’s one that people might want to guest post on, so you could take this traffic pattern as representative of the views on your prospective guest post.

If you make the post and then scramble to set up where you want them to land on your site and what you want them to see, you’re wasting the whole effort.  You want the landing page and user journey ready before that guest post ever goes live.
So should you guest post?  Probably not.
Probably not until you can trace a straight line from increased audience, back to your site, back to some user journey, and onto potential profit for you.   Probably not until you can make that a really nice experience for the readers and ensure that they get value out of it.  And probably not until you’ve got all of the details ready for their arrival.
Once you’ve got all of that in place, should you guest post?  Absolutely. 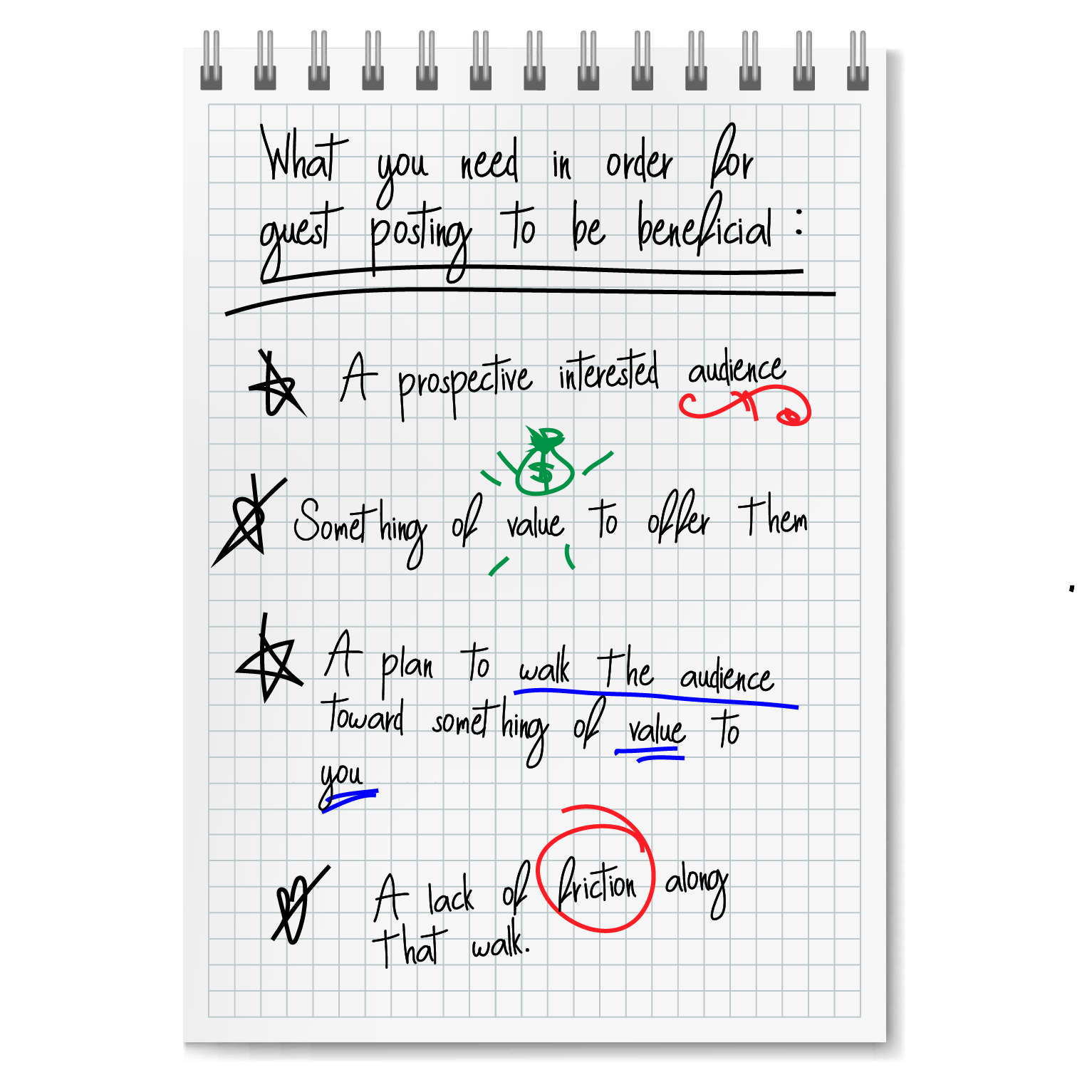 Feel free to embed this image in your page by linking!