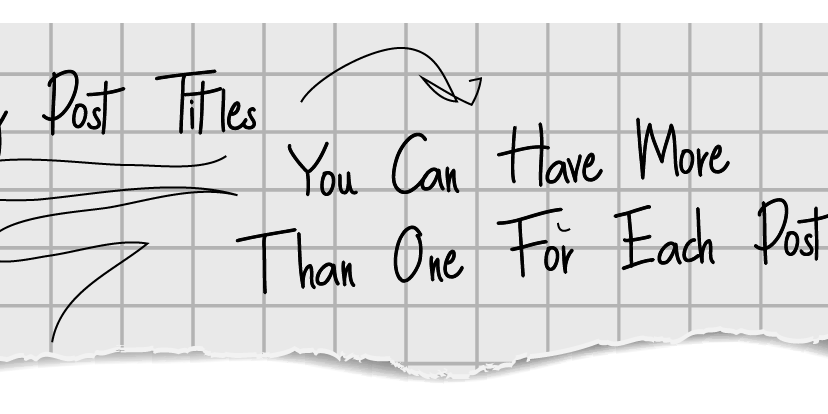 I’ve been a blogger now for more than seven years.  And I have to say, it took me an embarrassingly long time to understand the true nature of the blog post title.  My hope today is that you may learn from my folly.

There Are Actually (At Least) Three Flavors of Blog Post Title

If you’re like me, you think of the blog post as “the thing I type into the ‘title’ text box in my CMS/editor when I write a blog post.”  Perhaps you brainstorm for a clever title.  You know, something witty or slightly satirical and that subtly touches on a literary or cultural reference:

Ah, those are clever titles and I feel pretty good about myself.  So I enter them into the title box and call it a day.  A blog post title is a blog post title, amirite?
Well, yes, and no.  Yes, in the sense that you’ve given the post a title and that’s what site visitors see.  But no in the sense that you’re not actually exercising all of your options.  You see, your blog post potentially has three different kinds of title:

Let’s take a tour through each of these.

First up, let’s go with the easiest blog post title, which is the one that you’re already familiar with.  As an example, consider our last blog post.  Here’s why it’s called an “H1 Title.”

It literally comes wrapped in an H1 tag, earning it that moniker.  Of course, it’s always possible that you have a theme that actually makes it an H2 or something, but the idea is that it’s the biggest, most prominent bit of text on your page.
This is, by default, what you’ll think of when you think of a blog post title.  It’s what you see in the blog index, at the top of the blog post, and in your RSS reader or email notifications about blog posts, generally speaking.

So with that in mind, what makes for a good blog post title?  The sort of thing that I mentioned earlier, where you showcase your wit, giving subtly clever and dry titles?  Well, the elements of a good blog post title could make for a lengthy post in and of itself, but we can summarize briefly here.
The H1 title should make people want to click and read more.  Of course, that’s probably the purpose of any title, anywhere on the internet.  What’s of interest here is which people, specifically, we’re talking about.
The H1 blog post title is aimed at people already on your site and/or subscribing to your posts.
Why?  Well, because the people who are not currently on your site and are often strangers to you are going to see your other titles.  And they’re going to see them in other venues.  So when you think about this first, most basic title, think in terms of how you’d interest people already predisposed to reading your posts and paying attention to you.

Next up, we have the meta title for the blog post.  Rather than tell you what that is, let me first show you.

This is that same post, but we’re now looking at how it appears when you search for it using a search engine.  Notice that the title superficially seems the same, but there’s actually a difference.  Specifically, Google has tacked ” – Hit Subscribe” on to the end, effectively creating a slightly different title.
This is the meta title.  The meta title is something that you don’t see on the page when you view it in your browser.  It’s a part of the page’s HTML that is not rendered visually but rather used by the search engines.  Here’s where you can see this in our page’s source code.

As you can read here, on Google’s search console site,  it isn’t technically a meta tag on the page.  But search engines use it the way they use meta tags—to control what shows up on the search engine results page (SERP).
Most blogging engines make it pretty straightforward to set the meta information for the post.  If you’re using WordPress, the Yoast plugin that we’ve mentioned will let you do this easily.

What Makes a Good Meta Title?

So now you can see that you can have one blog post title that appears on the actual post and then another that shows up in search, it’s worth asking what makes for a good meta title.  Because it’s not quite the same thing.
Again, you want to get people to click, of course.  But this time, you’re not appealing to already sympathetic readers already on your site or subscribing to you.  Instead, you’re appealing to strangers via search engine.
This means that they won’t take much on faith.  Generally, searchers are trying to solve some specific problem.  Some of the blog posts in our taxonomy speak to these problems, such as “what is X?” or “how do I…?”
And so your title needs to indicate that you’re going to solve their problem.  Here, you don’t want to be coy and use cute titles or literary references.  You want things like “5 Free Continuous Integration Tools” or “How to Install Custom Visual Studio Themes.”  Imagine yourself searching for the thing you’re writing about, and pick a title that you would click to solve your problem as expediently as possible.

Last up comes the “OG title.”  OG, unfortunately, doesn’t stand for “original gangsta,” though you’re obviously welcome and encouraged to pretend that it does.  Instead, it stands for “open graph.”
I won’t go into a ton of detail here, opting instead to pull out just the important, title-related information.  When you add OG tags to a webpage (such as a blog post), you make statements about how a social media site, such as Facebook, should display that page.  To see what I mean, take a look at what happens when I write a new Facebook post and just paste the link to our blog post in there. 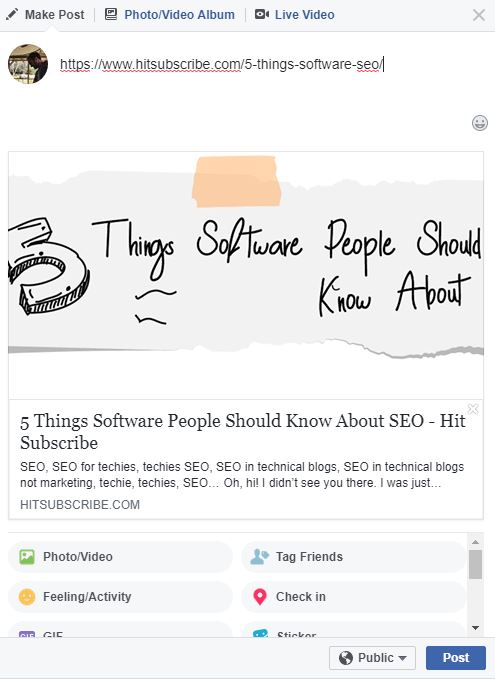 All I do is paste a link in there, and Facebook figures out an awful lot of information about how to render that page.  One of those things that it figures out is the title, which it draws from the OG tag among the meta properties.  Don’t be fooled that this is the same as the meta title from the last section.  This just happens to be true for our example, but it doesn’t have to be.  As you can see here, this title is a different property that you can set independently.

How you go about doing this exactly will depend on how you’re composing your posts.  If you’re using WordPress and Yoast, you have the capability to easily edit this for each post using just a text box.

What Makes a Good OG Title?

So now you’ve got a title for people visiting your blog and another for people stumbling on your site through Google searches.  What do you then do with this third blog post title option?  How do you make the best use of the OG title?
Well, to understand that, understand who is going to be seeing it and how.  It’s going to be on social media and right after a friend/connection shares it.  So think of what’s going to play when person A shares it with person B.
To some extent, this might be the place to click a Buzzfeed-y sort of click-bait tile, at least in a way that wouldn’t be a great look on either your blog or, especially, in search.  But that’s not the route I’d advise myself.  Instead, I’d suggest creating a strong and opinionated title that tells an entire story just in the title.  Think things like:

With an H1 title, you may want to be a little coy so as to entice your followers to click.  But in this situation, you want to court a bit of controversy, getting people to click just to see what’s up.  And, perhaps even more importantly, you want to encourage folks that don’t have time to read to share and amplify your message anyway.  If someone shares the post on social media with me and I hate Javascript, I don’t even need to open the post to throw it a like or a share and express myself.
So pick titles with this in mind.

But Don’t Drive Yourself Crazy

All this said, I’ll close by saying not to go too overboard with this.  Up until this point you’ve probably just unwittingly had the same title in all three venues (or maybe an automated “- Your Blog Name” on the end of your meta/OG titles).  And you’ve managed to have a blog without catastrophe.
So understand that these options exist and brainstorm ways to take advantage of them.  But don’t feel like you need all three titles to be different and completely perfect for every post.  Titles are important—critically important.  But high-quality content and a steady cadence are king.  Write good posts with an audience in mind, and clever titles for each venue will follow.